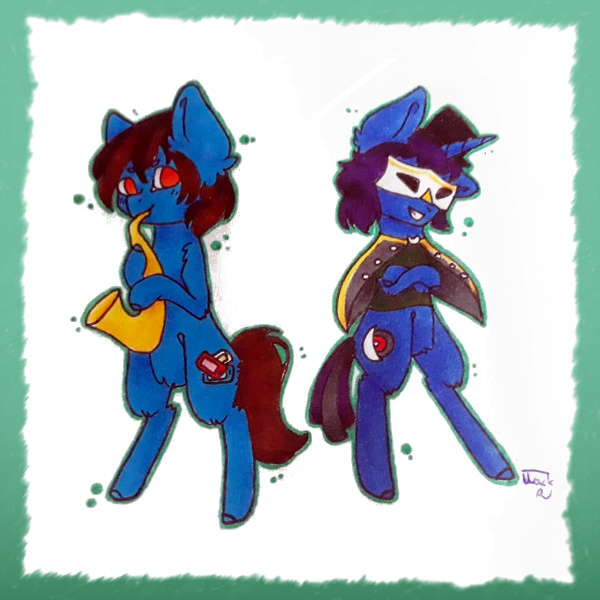 There are easier ways to get tickets for BlipCon Prime in New Oreins — Amareica’s biggest celebration of video gaming and indie music — than mashing the refresh button and waiting in virtual line like everypony else. However, you have to earn it.

Blast Furnace recently pulled off an upset win at a semi-major Hooves of Fury V tournament, and was subsequently invited by the game’s publisher to an amateur invitational at BlipCon to promote Ultra Hooves of Fury V Arcade Edition. She received a pair of Deluxe passes, and already knew exactly who she was going to take with her.

On the other hoof, Train Spot and Wave Rider’s new electronic music act The Third Rail was beginning to gain a following, and their first-time panel submission, “Electronic Music At the Turn of the Century Is Objectively Better Than That Junk Everyone Is Putting Out Now” (or “E-mat-oh-ceeob-jay-pon” for short) was deemed worthy enough to make the final event program (along with a live performance for good measure).

However, both camps soon noticed that a rather popular, regional holiday known as the Spring Renaissance would be reaching its peak right before BlipCon. It’s a peculiar event, where local social groups known as Guilds — named after various deities — hold various parades and masquerade balls in an effort to wrap up Winter. One article noted that while some still play this celebration straight, much of it has always been tongue-in-cheek, and that wild parties and LARPing “battles” between guilds were also common.

It just so happened that both Blast Furnace and Obscurus Noctis had encounters with members of guilds that also attend the Gathering of Embers (and that Eight Track had never told Obscurus’s crew about his previous aspirations to be a jazz performer before becoming a DJ instead, and still knew how to play the sax). However, these guilds also happened to be intense rivals!

I guess we can wish everypony a happy Renaissance Day, then!

TrotMania the Fifth is gradually inching closer to completion: we still have other songs being worked on, I’ve been getting back to work on the user experience, and we still have some rather important and prominent roles available for musicians who think they can challenge themselves to become our next great challenger.

Unlike previous editions, we are trying to handle the release of Shrive a little differently. Rather than the long-term drip-feed of patches and content we’ve done in the past, our main plan is to have more of a singular, final release off the bat. However, don’t rule out any major post-release events too: I evaluated your reception to Trials of the Embers, and I promise that if we do such a thing again within Shrive’s release cycle, it will definitely be balanced better for sure.

In addition, I don’t think that I have brought this up on the TrotMania blog yet, but I have personally been involved in a major collaboration with prominent members of the StepMania community as a whole to, essentially, build a new version of SM (initially dubbed version 5.3) that will include major internal improvements that have been long-overdue, as well as some other new features and enhancements that will more than likely be used within TrotMania in the future. For more information on these efforts, there is a development blog located at projectmoon.dance.

Let’s get back on-topic

Now that we got that out of the way, the parade of previews for Shrive’s soundtrack isn’t over just yet!

And one more thing

How’d you like a little taste of what’s to come?