Welcome, people who just got here! We got an updated revision!

All we can say now is FINALLY. I personally think this took way too long to finish, but we all pulled through. I am promising now that TrotMania IV will not take over a year to complete ... but if we want to meet this goal, we'll definitely need some help (hint hint).

But even without a new release, awareness of TrotMania as a whole has grown significantly; we've been featured at brony con game rooms (either with all the trimmings, or as just another folder on an OpenITG rig. Not like the latter is bad, mind you. Any exposure is good exposure), and the magic of friendship has gotten us new allies to take us even further (such as PonyvilleFM, the My Little Karaoke team, etc.)

With that in mind, I think it's about time to finally get this party started. Welcome to *TrotMania III: Aternum Obscurum*.

It all sounded normal on paper. SSC Las Vegas; three nights of electronic music, dusk till dawn. Just you and about 29,000 other ponies, maturely trotting around to your favorite DJ's, practically in the middle of nowhere, without worrying about mischievous fillies scampering around and causing ruckus, and dressing up in ridiculous outfits that would probably scar a certain fashion-focused unicorn for life rather than inspire her. But there is a bad feeling in the air: you swear that an uninvited guest is planning to spoil this party. Something tells you that this festival may last a little longer than originally scheduled... but is this really a bad thing?

Oh, this night is going to last forever alright! Sixty songs, a brand new theme, and this is only the the initial pack! (there won't be as many as Chrystalize, but we are planning a few booster packs/patches too, including a brand new original boss.) So, what are you waiting for? 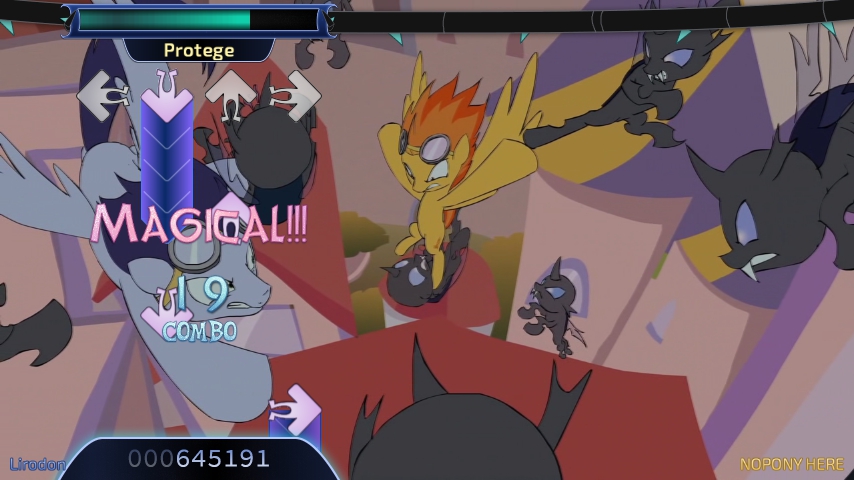 There will be a "full" package a little later on with the TrotMania III content in a bundle with a pre-configured version of StepMania, but this time we've decided to start out with a "modular" version that you can add to an existing StepMania installation. On launch, this consists of the TrotMania III song pack, along with optional Theme and Noteskin (arrow design) packs.

The TrotMania III theme requires the latest version of StepMania to function. Specifically, at least 5.0.7. We will not address "bugs" caused by running it on an older version.

If you have any questions, we recommend posting them on the TrotMania Discussion section of the forum

And now, the moment you've been waiting for:

Thank you, and enjoy!
- Lirodon and the TrotMania Team
11 Comments
Comments